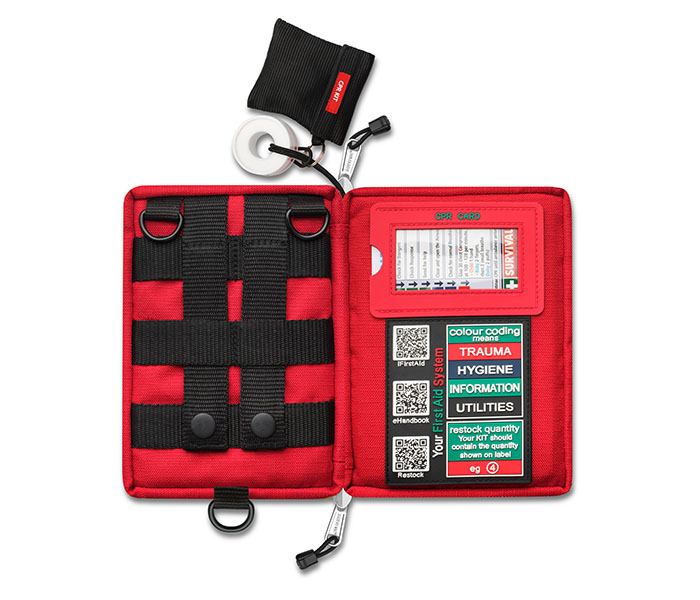 First-aid kits scream, “Calm down, breathe, relax, I got this, I’m prepared, you can count on me …”

Whip one out in a crisis and you immediately take charge in an emergency situation.

And your quick-thinking and fast action could save a life.

First-aid kits are not a luxury item, they’re a necessity – in the home and at work.

Our homes are covered with smoke alarms, but are you prepared for a serious burn, or bite, nosebleed, sprain or fracture from a fall? Would you know what to do in an emergency?

Outside of the home, Safe Work Australia requires all workers be able to access a first-aid kit in their workplace.

What a full first-aid kit should contain

Containing all the components you need to be workplace compliant, this kit will have you covered for any workplace emergency.

An organised and properly stocked first aid kit means being prepared – you could help you save a life.

Up to 15% of motor vehicle accident deaths could be prevented if first aid is administered before paramedics arrive on the scene.

Sadly, fewer than five per cent of people in Australia are trained in first aid, one of the lowest rates in the world, according to the Red Cross.

Doing a first aid course is recommended to give you the knowledge and skills to provide capable first aid assistance.

Other alarming statistics about first aid

First-aid kits are even available for specialist situations, like these snake bite survival kits:

Buy one of the first-aid kits at Vital First Aid Training Services now for peace of mind in an emergency. 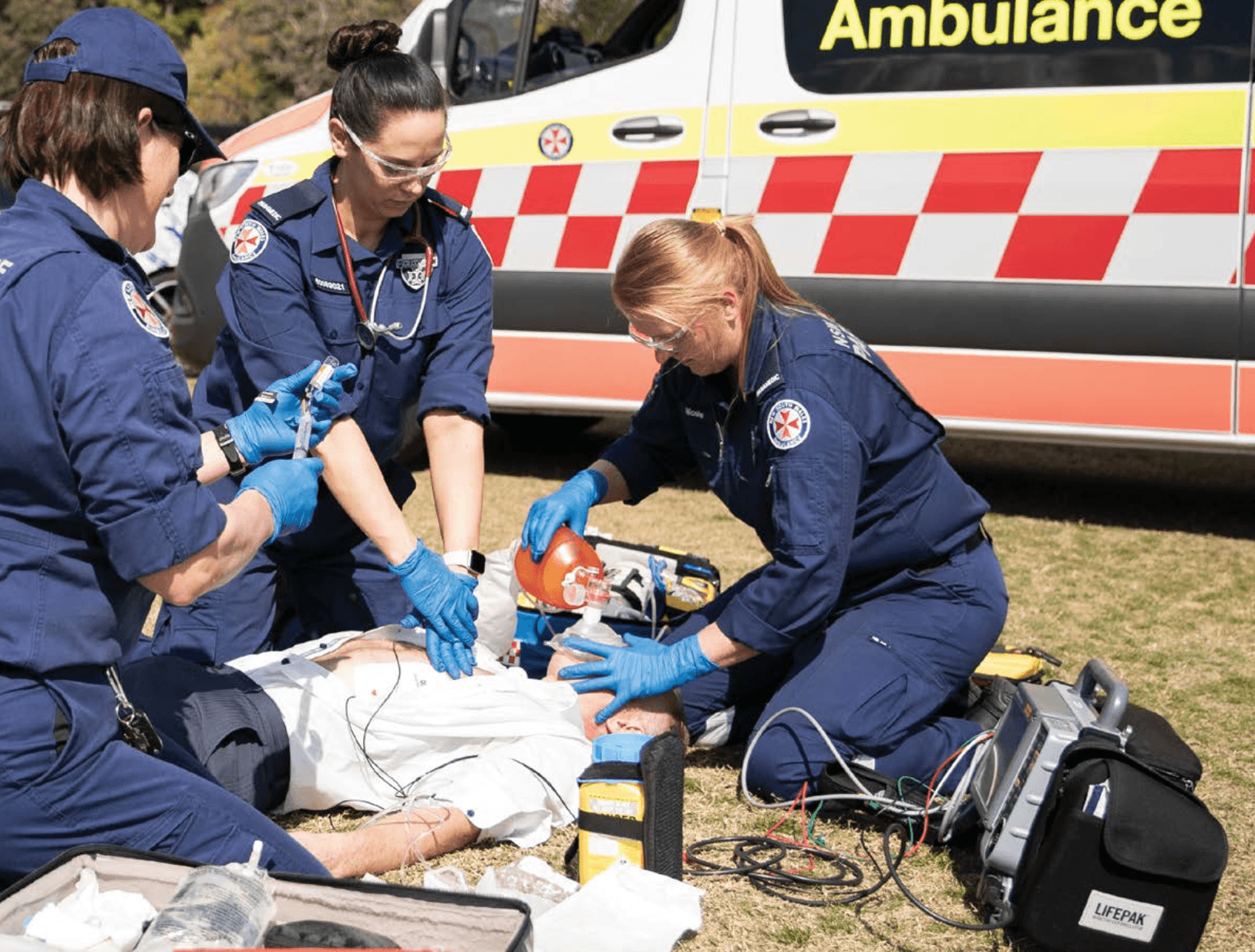 After spending a small fortune to insure yourself, your loved ones, your home, your car and your pets from every emergency possible, you may think you’re prepared.

What about an AED – more commonly known as a defibrillator – for your heart?

You’ve fitted the smoke alarms. Checked the fire extinguishers. Pumped up the tyres. You’re ready for what life may throw at you. Or so you thought.

It turns out, every year, more than 33,000 Aussies go into cardiac arrest. Their hearts just stop.

And left for anywhere up to 10 minutes without any intervention (and even with correct CPR), there’s only a very slim chance of survival, and beyond this time, they will most certainly be permanently brain damaged.

Timing is everything in this critical emergency situation.

But there is a way to give yourself, or your loved ones, a fighting chance.

An AED is a lightweight, portable device – more commonly known as a defibrillator – that can shock a heart that’s experiencing cardiac arrest back to life.

Thankfully, Australia is very proactive – our hospitals and ambulances are well equipped with AEDs (this stands for Automatic External Defibrillators) and increasingly our fitness centres, schools, surf clubs and other places where people gather in numbers are investing in this life-saving technology.

WHAT DOES A DEFIBRILLATOR DO?

The machine monitors a person’s heart rhythm and – if defibrillation is necessary – it will try to restart the heart or restore it to the correct rhythm.

HOW THE AED TOOK OFF IN AUSTRALIA

The late billionaire and media mogul Kerry Packer made a $2.5 million donation to the NSW Ambulance Service after a heart attack he suffered in 1990.

If it wasn’t for a passing ambulance being fitted with an AED, he would have surely died.

“He said, in his inimitable fashion, I’ll make you a deal, I’m told it costs about $5 million to put one in every ambulance, I’ll go you halves,” The SMH reported Mr Greiner as saying.

Defibrillators were fitted into every ambulance, earning them the name “Packer Whackers”.

“HELP! I HAVE NO IDEA HOW TO USE A DEFIBRILLATOR”

It’s okay. Don’t panic! These machines are designed to be foolproof, especially in an emergency. The AED uses audio or text prompts to guide the user on how to proceed at every step.

You can’t make the situation worse, only better, if you follow the easy, step-by-step prompts.

The device is also designed to warn users to stay clear of the victim while the shock is delivered, making it safe to use.

HERE’S WHY DEFIBRILLATORS ARE IMPORTANT

When you know that 68.5 percent of the 456,000 out-of-hospital cardiac arrests occur at home, it’s pretty clear that having an AED on hand in the home gives you the best chance of saving someone you love.

In Australia, the survival rate of cardiac arrest without a defibrillator is 6-10 per cent.

However, when a defibrillator is used within five minutes that survival rate goes up to 70-80 per cent.

Knowing that the ambulance median response time for these kinds of emergencies is around 8-9 minutes across most states of Australia, every minute counts.

WHERE TO BUY YOUR VERY OWN AED

It’s important to speak with the experts in not only those supplying the defibrillators, but also those who have used them, the paramedics.

The owner of Vital First Aid, Adrian Date, has been working with defibrillators for more than 30 years. He was involved with the rollout of the HeartsStart 3000 (the defibs donated by Kerry Packer in the late 80’s) and still actively promotes the need for defibrillators in Australia.

“Our focus in Vital First Aid is training, not sales, this simply means that we can give expert advice on defibs not based on ‘profits’, but based on genuine knowledge and understanding of what’s best for you,” Adrian said.

The above unit normally sells for $2695, but Vital First Aid is selling defibrillators NOW for $2400.

• Will a defibrillator restart a heart?

Cardiopulmonary resuscitation (CPR) won’t restart a heart in sudden cardiac arrest. CPR is used to continue a minimal supply of oxygen to the brain and other organs. Only a shock from an AED can restart a heart that has stopped.

• Is an AED safe to use on someone with a pacemaker?

A defibrillator can be used on a person with a pacemaker, but the pad must be positioned slightly away from the pacemaker scar.

• Can defibrillators be used on babies?

It’s considered safe to use an AED on infants and children. Most AEDs come equipped with pediatric settings and/or pediatric pads that adjust the energy level used.

• Can defibrillators be used more than once?

AEDs don’t “run out” after one use – they’re built to last and can be used multiple times, but batteries and pads don’t last forever, so it’s important to keep the unit well juiced and accessories maintained.

• When were defibrillators invented?

Here’s a great brief history of the AED, but to summarise, chickens and dogs copped it between 1775 and 1899, before US Electrical Engineer William Bennett Kouwenhoven began developing defibrillators in 1928. Over the years, the defibrillator expanded and went external. Then, in 1966 cardiologists J Frank Pantridge and John S Geddes in Northern Ireland were the first to install portable external defibrillators in an ambulance. Today, AEDs are smaller, lightweight and affordable for everyone.

Traveling thru Sydney during this lockdown for first aid training is not recommended – there are better and safer options.

Unfortunately ALL our Sydney venues are closed due to the COVID Lockdown till the end of July. We feel that the risk of moving thru Sydney unnecessarily is simply too great for our trainers and students.

You can complete our online option for CPR and First Aid at home and avoid traveling during this Lock-down.